Tumblr is a microblogging site/social platform that has been in operation since 2007. There are around 176 million Tumblr blogs in circulation, with approximately 200 million monthly visits.

To use Tumblr is simple. To effectively use Tumblr, it’s just as simple, though there are just a few key areas you need to pay attention to.

1. The Interface and Social Networking

The interface is an absolute delight; need to post a quote? There’s a button. An image? A button. How about a link? You guessed it, there’s a button. Access to the interface is located at the top of your dashboard and clearly labelled. This amount of organisation is suited for a wide range of users but also, it’s visually pleasing in it’s simplicity.

Tumblr is more of a social network than a dedicated blogging platform. It does of course have blogging functionality but it isn’t limited to just that. One of Tumblr’s greatest strengths is the integration with other platforms, interaction with fellow users and how easy it is to share with one another.

To fully utilise Tumblr’s full potential, you will need to put in a little effort. Thankfully that is all it really is –  a little effort, as Tumblr is a viable platform to use for personal or business use.

2. How to be Seen on Tumblr

In order to be seen on Tumblr, you need use the correct tags. Tags are imperative to each and every one of your posts. Without them, users are unable to find your content through searches as Tumblr doesn’t use conventional keywords like other social networks. 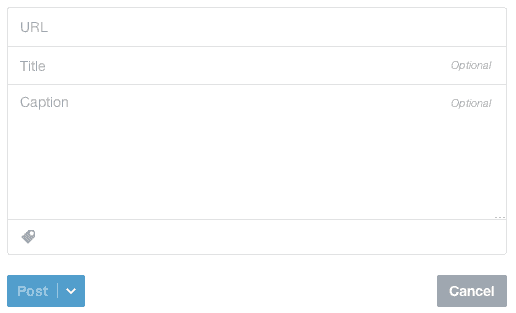 There is no official limit to how many tags you can use, but the general rule of thumb is between 7 and 12 tags. Any more than that and it may be considered spammy.

A great way to determine which tags are trending is to use the Tumblr search within the Tumblr dashboard. Alternatively, you can go to the search field from your browser http://www.tumblr.com/search. Simply type in a tag(s) you wish to use and pay attention to the results. Does your tag(s) relate with the results?

It’s all very well targeting a wealth of tags to increase your chances of being found, but ensure that the tags are relevant to the nature of your post. Tumblr users aren’t likely to share your content if you hijack a wide range of irrelevant tags. The trick is to monitor the other tags associated with the tag you are targeting.

As with alternative social platforms, you can like posts or reblog them (the same as Twitter’s retweet function). Reblogging a post can be configured too as you can add additional tags to the original entry. You can add as many as you like, but it goes without saying that abusing the amount of keywords will impact your presence in a negative way.

Reblogging is different to reposting. Reblogging a post leaves a trail to the original source in the form of notes. Reposting is simply taking authorship of an original post. While you can go ahead and do the latter, some Tumblr users may not be so favourable of your methods; the reblogging method creates further traffic for the original poster. If you break that link, the original user may be missing out on a potential audience. Remember, it’s a social platform so you might want to take this advice as to not alienate yourself from other users.

Tumblr isn’t a conventional SEO package and it has been argued whether Tumblr has much weight in terms of search engine results. Despite the many automated tasks and ease of use, Tumblr will not necessarily raise your profile in search engines. You can manually edit the SEO to increase your chances though in a few custom fields.

As with all SEO guidelines, ensure the title of your post is relevant and contains any keywords you are targeting for – you are able to customise the URL for your post too.

5. Connecting With Your Audience Who Aren’t Tumblr Users

In order for your audience to connect, they need to be able to like and reblog your posts. Once they have done one of the two, they are then able to make a comment. What about users who do not have a Tumblr account? You can rectify this by installing the popular comment system Disqus to Tumblr.

After following the instructions on the Disqus site, non-Tumblr users can comment. Of course, they would benefit from a Disqus account, but as most social platforms require a registration, by implementing Disqus – a universal platform that can be integrated everywhere – you increase the chances of engaging with your audience.

There is a wealth of readily available themes both free and for premium use – many of which are more than adequate for most scenarios. If you intend to configure your site appearance to match your own existing site or whether you simply cannot find a theme suitable for your needs, you can create your own.

Theming in Tumblr is relatively straightforward if you are skilled with HTML and CSS. There are numerous sites featuring tutorials on how you can do this. Alternatively you could try a premium theme from the likes of Theme Forest or hire one of the many Tumblr developers available on a popular freelance site such as oDesk.

Even if you decide not to change the theme itself, there are many ways to customise at the click of a button without knowing any code. If you are familiar with CSS though, you can add styles in the Advanced tab of your theme. It’s really that simple. As a social network, Tumblr is arguably one of the most flexible in terms of customisation. 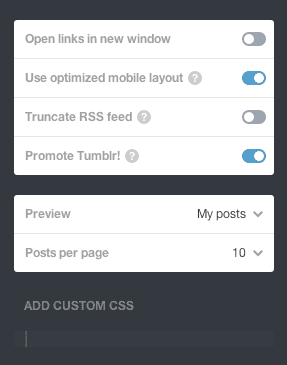 Tumblr is an excellent source for engaging with your audience and sharing content. In terms of business, the visual element is ideal for promoting products and/or services and in some respects, similar to Pinterest. Additionally, Tumblr is a great medium for blogging too – either to supplement your main website, or as your sole website.

As Tumblr is both free and hosted, you have nothing to lose. Other than your time creating a suitable content strategy plan!

How Many Links Should I Have on a Page?

The Anatomy of an Unstoppable Corporate Logo